Critics of the wind industry are dominating discussion about the future of the UK energy system following this month's blackout. However, with the British government in transition, the industry can't let this happen. Our editor Richard Heap looks at what this means for wind in the UK. 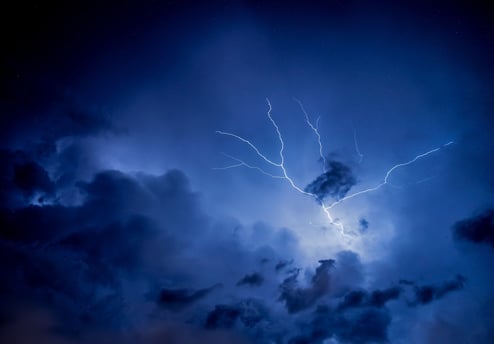 The UK this month saw its worst blackout in a decade.

Over 1million homes, countless businesses and vital public services were left without electricity on 9th August after lightning struck a high-voltage transmission line near Bedford.

This led to almost simultaneous shutdowns at Ørsted’s Hornsea 1, which is in the commissioning phase ahead of full operations next year, and Little Barford gas-fired power station. National Grid reported that this took at least 1.3GW off the grid and it could not cover this with the 1GW that it had in reserve.

There will be continued fallout. Ofgem is due to release its technical report about the blackout on 6th September, but people are already drawing their own conclusions. It's worth looking at what it means for the wind sector.

The first thing to say is Ørsted has spoken publicly about Hornsea 1’s role. It said there was a “technical fault” at the scheme but “the relevant part of the system has been reconfigured”.

It added: “We are fully confident that should this extremely rare situation arise again, Hornsea 1 would respond as required.”

There will no doubt be some lessons here worth sharing with the industry, and we are sure that Ørsted and the wider industry will take this seriously. But we want to focus on what this means for wind in the UK, and what happens next.

It’s fair to say that plenty of people are drawing the conclusions they want to ahead of the detailed Ofgem report.

For people who don’t like wind farms, this is a perfect opportunity to push the message that this shows how vulnerable the grid is with wind farms on it. National Grid has sought to dispel these accusations. It has said that the blackout had nothing to do with the variability of renewables, but the grid operator will struggle to quieten the anti-wind voices.

The blackout has also drawn further attention to Hornsea 1’s strike price of £140/MWh, which was agreed by the UK government in 2014 before the rapid cost falls we have seen in the last five years. Again, no quibbles from us. Yes, the price looks high now, but they were the levels needed early to support commercialisation of offshore wind.

However, this does enable critics of wind to make claims of offshore wind being too costly. Thought you’d seen the back of that claim? Think again.

So why does this matter? Every sector has its critics, after all. The reason it’s worth drawing attention to this now is that the Conservative Party has only recently named Boris Johnson as British prime minister.

The priority of Johnson and his cabinet is, of course, to take the UK out of the European Union, but it also means there may be changes to UK energy policy. Because of this, the criticisms we’ve highlighted above are likely to carry greater weight than they may do at other times.

Yes, the UK has its 30GW by 2030 ‘sector deal’ for offshore wind, but it also now has anti-wind Andrea Leadsom as energy minister.

We also saw this month that 150 members of parliament, including some Conservatives, have written to Johnson to say that he should reverse the government’s hostility to onshore wind. But this sensible call could be drowned out because of coverage of this blackout.

There are undoubtedly lessons for Johnson to draw from this blackout – but withdrawing support for wind or 'net zero' plans aren't among them.

The right lesson is that the UK electricity grid is evolving, and that wind is a reliable part of that – and will continue to be. We are moving away from a system based on a handful of centralised generators, and towards a system with smaller and intermittent suppliers. The government must continue to support investment in grid improvements that will enable the UK to carry on with this journey, not to go back to the ways of the past.

This is the message that the UK wind industry must give loud and clear.

You can discuss the key issues facing the wind industry at our Financing Wind Europe conference on 31st October. For more, click below...